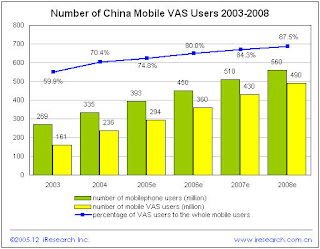 China has over 363 million mobile phone users according to CNNIC. This number is greater than the next three nations combined with the US posting 180 million mobile users, Japan 88 million, and Germany 69 million. In addition, the US seriously lags when it comes to cell phone technology usage. Do you think text messaging and ring tones are cool? The Chinese will scoff at you. While we struggle with dropped calls in “dead zones,” they play games, post to their personal blogs, and access the Internet – all from their cell phones. They also text message constantly: in 2004, 652 text messages per phone were sent versus 139 sent per phone in the US.
By Syndicated Maps at 4/13/2006