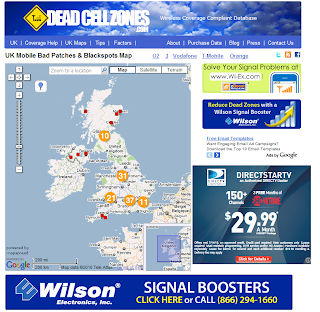 After many requests to expand the database outside of the U.S. & Canada. DeadCellZones.com has just launched a new site for the United Kingdom focusing on the following UK carriers: O2, Vodafone, T-Mobile, Orange and 3. The web site is similar to the U.S. database, however it doesn't currently have any complaints. It is important that mobile users in the UK share this with web site with their friends to in order to build a credible database that carriers will pay attention to. The database will focus on coverage complaints in the largest metro areas initially which include: Birmingham, Bradford, Coventry, Leeds, Liverpool, Manchester, Newcastle upon Tyne, Salford, Sheffield, Sunderland, Wakefield, Westminster, City of Bristol, Derby, City of Kingston upon Hull, Leicester, City of London, Nottingham, Peterborough, Plymouth, Portsmouth, Southampton, Stoke-on-Trent, York, Belfast, Londonderry (Derry), Cardiff, Swansea.
By Syndicated Maps at 5/16/2006