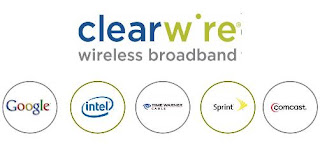 Clearwire is currently changing its business model as it becomes more of a wholesaler. The company plans to focus on leasing space on its WiMax network to other telecommunications companies like Time Warner Cable, Sprint Nextel and Comcast. WiMax networks currently cover 30 million people in the U.S., though Clearwire has less that one million subscribers. Clear is the service end of Clearwire’s roll out plan.

Rumor has it that Clearwire / Sprint may be the first operator to launch an MVNO with the Apple iPhone as well.  This would be a great way for entrepreneurs and value added resellers to get in on a piece of the action.

Clearwire currently offers service in 27 markets throughout the U.S., including Las Vegas, Chicago and Philadelphia. There have been rumors that Clearwire may team with Wal Mart to roll out complete coverage across the U.S. and they are also in the process of making a big push to get into two more vital markets, New York and San Francisco.
By Syndicated Maps at 2/03/2010