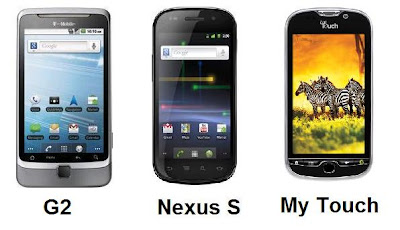 smartphones are being sold at T-Mobile stores and on Amazon Wireless.  However, the Nexus S is only being sold at Best Buy stores currently much like its predecessor the Nexus One.

The G2 weighs 6.5 ounces and has a metal casing around the phone and feels more solid.  The MyTouch is plastic and weighs 5 ounces and comes with the option of a My Touch slide keyboard.  The Nexus S is the lightest phone and weighs just 4.55 ounces according the the specs.  Here is another smartphone weight comparison of iPhone, Droid, G2 and the Samsung Galaxy .
We are not sure if the Nexus S has HSPA+ but it seems crazy that it would not have it.  We continue to see web sites that claim it doesn't have it and that would concern us.  So we think that all of these phones are capable of running on T-Mobiles 4G HSPA+ network and its very fast if you have it available in your area.  All processors are basically equal and you won't notice the difference in performance from either one as you switch between applications.  Here is a comparison of 4G speeds to 3G.

Each phone has a native VoIP application built in to allow you to make phone calls via WiFi if you are in a building or home that does not have a strong T-Mobile signal.  This is a tremendous breakthrough for the industry thanks to Kineto wireless and T-Mobile USA is leading the charge for improved communications in the home.

The Nexus S and the MyTouch both have front facing cameras and the G2 does not.  This is not a big deal in my opinion as this is another feature that is not widely used nor is it fully integrated with Google Chat, Skype or Google Voice as I understand it.  However, video chat will be exiting in the near future as VoIP video chat platforms become more tightly integrated.

The Nexus S is currently running the latest Android operating Gingerbread which has NFC near field communications built in which will eventually provide the capability to do mobile payment transactions.  If you buy this phone for NFC alone you won't be able to use it in any locations because there are few if any retailers around the world setup to use NFC.  However, its exciting to see developers starting to use NFC and the Nexus S.