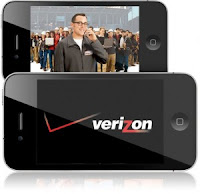 Verizon customers are waiting for the iPhone 5 as it appears at Apple and Verizon retail stores.  Today, was the first day of the Verizon iPhone 4 being available at stores and it was greeted with a luke warm response.  There were no lines and the crowds were very small at all of the stores I visited in Southern California and it appears to be the same elsewhere around the Country.

This is not surprising and is not the first time that Verizon has hyped the marketing for a product.  It will be interesting to see how Wallstreet responds to the excess inventory of iPhone 4 phones that will likely be building up in stores this Spring.  The real question is weather the huge demand for iPad's will make up for the difference?  We suspect that Verizon and iPhone executives have grossly over forecasted the demand for the iPhone 4 for the following ten reasons.

1) Consumers have moved on from the iPhone and are now interested in the Verizon iPad vs Verizon iPhone.

2) Wireless users are using their phones for primarily data now and it is well known that CDMA is not fast.

3) iPhone 5 LTE is probably going to be out later this year and so the iPhone 4 will be quickly obsolete.

4)  iPhone AT&T dropped calls are frustrating but its old news and customers have learned how to deal with it by turning off 3G when making calls.

5)  Android phones and applications have caught up to the iPhone

6)  Android phones have 4G and there are many better alternatives using HSPA+.

7)  The iPhone 4 is too expensive and has jumped the shark.

8)  Verizon's customers are already using the Droid Pro which is a better phone.

9)  CDMA does not work overseas.