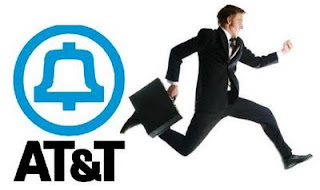 The "Old School" telecom company is not adapting quick enough in a "New School World".  AT&T (NYSE: T) is scheduled to release its quarterly earnings and will likely be disappointing to investors in the short tern and AT&T's dividend could be in jeopardy in the long run.  Here are 10 heavily studied reasons why investors should run for the hills now if they are invested in the stock.  AT&T's 5% annual dividend could evaporate slowly as the "WiFI revolution" is starting to gain momentum.
1)  The iPhone and iPad 3G have given AT&T a boost in subscriber additions. For example, in Q4 2010 the company added 2.8M customers.   However, 1.5M were connected devices that have lower ARPU (average monthly revenue per user).  This trend is likely to continue as free WiFi will continue to compete with expensive 4G and coming LTE.

2)  WiFi competes with 4G and AT&T doesn't have a compelling reason why users should pay the extra amount for it when iPads are used 95% indoors.

4) Apple stock decline recently is another reason to be concerned about the lack of 3G subscriber growth.

5) iPad 2 tablets are not price correctly and the 3G versions should be cheaper than the iPad WiFi.  The 3G iPad should be subsidized and priced at $300 if they want to keep monthly subscribers.  See how to choose iPad 2 data plan.  However, we think most people will want to use the using Pad 2 without a data plan.

6)  We have a contrarian view and have lots of evidence to believe the acquisition of T-Mobile is in jeopardy and think Obama will appose the merger.  AT&T's corrupt union is promoting bogus propoganda to promote the merger and AT&T is banking on the Union ties with Obama.

7)  AT&T's advisors are blatantly lying to on CNBC about the merger.

9)  10 Reasons why T-Mobile customers will leave for Sprint, Virgin Mobile, MetroPCS or TracFone.

10)  AT&T and Verizon (VZ) are losing the Net Neutrality battle because open access to data on the Internet will come a Civil Right.
By Syndicated Maps at 4/19/2011