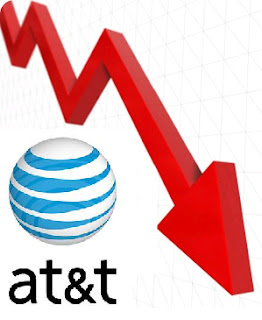 
AT&T's (NYSE: T) wireless subscriber growth plunged 88% from year-ago levels as Apple's (Nasdaq: AAPL) iPhone finally started selling at rival Verizon (NYSE: VZ).  However, the stock is This comes as no surprise to us as we predicted in our AT&T earnings preview posted this week.

AT&T's growth rate is down 90% in Q1 compared to 2010 numbers. Verizon is expected by analysts to have added 900,000 post-paid subscribers in the same quarter. AT&T is also losing customers to cheaper pre-paid carriers like MetroPCS, which is expected to add 500,000 prepaid customers in the quarter.

In the earnings call AT&T said it added a 62,000 post-paid wireless subscribers in the first quarter, compared to the 512,000 subscribers it added in 2010 when it sold the iPhone exclusively. However, AT&T added 58,000 tablet contract customers in the quarter while only adding a net of 4,000 customers for post-paid phones.

AT&T customers are leaving in droves and this is the only reason why AT&T is buying T-Mobile in order to protect its user base.

Overall, AT&T says it added a total of 2 million new lower paid wireless customers in the first quarter, a number that includes 1.3 million connected devices like Amazon (Nasdaq: AMZN) Kindles and MiFi hot spot boxes. These devices carry a much lower ARPU and the data subscriptions are not as predictable.