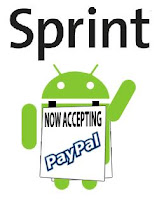 Sprint (S) may try and do a "full court press" on its competitors AT&T, T-Mobile & Verizon with new plans to deploy mobile payment services services this year that will allow consumers to check out at registers with their phones.  Sprint is working with phone makers and payment networks to bring to market what the industry calls near-field communication. Sprint phones with the NFC microchip can be utilized for a mobile payment service where they can be used when purchasing in retail outlets that have a special terminal designed for the system.

A joint mobile payment service venture among Verizon (VZ), T-Mobile, and AT&T (T) is set to be introduced within the year. Verizon, AT&T and T-Mobile are working together on a competing technology with banker Barclay’s called Isis. In that banking which may not emerge for another year or more the wireless companies would pocket a fraction of each transaction.  This partnership just smells bad and you know it will be crappy for consumers and fail.  Look this to fail miserably and have horrible adoption. Today, only 150,000 merchants have devices needed to accept credit payments from cell phones and consumers don't know about it.

I would rather see a partnership amongst platforms that already has distribution like PayPal and Android.  Sprint needs to think more aggressively like this because they don't have enough firepower to go at it alone.  They need a big partner like Google (GOOG) or Ebay (EBAY) who already understands the transaction business.  Amazon (AMZN) and Google (GOOG) are already working on their own mobile payment networks for phones with NFC enabled chips on Android phones, and both Microsoft and Apple have reportedly been working on building phones with NFC chips inside. Android has a tap and pay mobile payment system and Sprint will likely leverage this. Don't be surprised if Sprint is secreting working with Google.  In 2008, Sprint partnered up with the San Francisco’s Bay Area Transit Authority and Jack in the Box restaurants to offer NFC credit card payments. Was this endeavor successful and what happened to it?
By Syndicated Maps at 4/05/2011