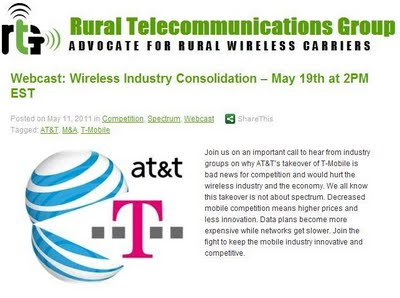 Join us on an important call to hear from industry groups on why AT&T's takeover of T-Mobile is bad news for competition and would hurt the wireless industry and the economy. We all know this takeover is not about spectrum. Decreased mobile competition means higher prices and less innovation. Data plans become more expensive while networks get slower. Join the fight to keep the mobile industry innovative and competitive.

As the debate surrounding the proposed AT&T / T-Mobile merger continues to rage, small providers, public interest groups, consumer rights organizations, and antitrust experts have banded together to speak with one unified voice, calling for a block of the merger that surely represents a major step toward putting Ma-Bell back together. In anticipation of next Thursday’s House testimony, our panel of experts has prepared a unique, interactive webinar to serve as a background briefing on this pressing issue.

The Rural Telecommunications Group (RTG) is a trade association representing rural wireless carriers who each serve less than 100,000 subscribers.

Sprint Nextel offers a comprehensive range of wireless and wireline communications services and served more than 49.9 million customers at the end of 2010.