How to Make Phone Calls on Wifi 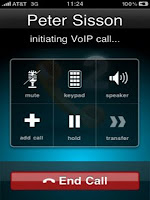 Making phone calls on Wi-Fi can be useful in many indoor locations where cell phone reception is not available or no signal is present.  In this video, Line2 Founder Peter Sisson discusses the key differences between Line2 and Google Voice, including Google's claim to the full "right, title and interest" to your Google Voice phone number. Line2 complies with FCC rules and allows portability where as Google Voice owns your number if you are concerned with ever moving it to another service. Peter also covers other key differences, including how Google Voice mobile uses your cell plan minutes to make calls, while Line2 does not. At $9.95 per month its not a bad deal especially if you don't have cell reception in your home or office.  It can save you from buying a Femtocell, AT&T Microcell or Verizon femtocell that has been reported to not work and drop lots of calls.