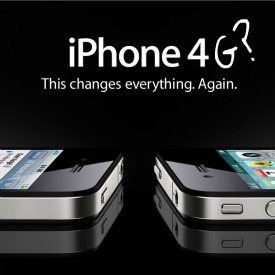 The iPhone 4S is not 4G but it does support both GSM (AT&T & T-Mobile) and CDMA (Sprint & Verizon) networks that are HSPA+ compatible. HSPA+ is much faster than 3G when you are used to a 3G network, however, it is not technically 4G. One thing to note is the iPhone 4S only supports one network at a time and is not 4G. 4S is not technically 4G and does not support LTE nor WiMAX.

Apple (Nasdaq: AAPL), AT&T (NYSE: T), and Verizon (NYSE: VZ) have done a masterful job of planned obsolescence and also confusing customers about what 4G.  It continually amazes me that Apple loyalists continue to buy the iPhone, even though its processor and data connection speeds are clearly two-plus years behind other phone manufacturers like HTC, Samsung, and Motorola who use the Android operating system.  These manufacturers were out with 3G HSPA+ phones 2 years ahead of Apple and are already working on LTE phones.
By Syndicated Maps at 10/18/2011