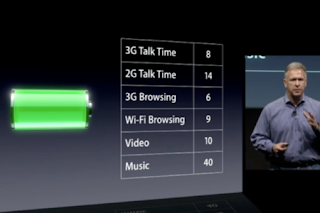 For anyone who rushed out and purchased a brand new iPhone 4S, they were greeted with several new and innovative features. The new iCloud provides all Apple users a chance to access the company's infrastructure as a service options from any device they own. Siri became the talk of the town when its artificial intelligence capabilities were announced. The camera on the 4S model even got a major upgrade to a professional model.

The one thing that has stifled most anyone from actually using any of these new and exciting services was the major battery life that the new device consumed. When Apple released their latest operating system through iTunes, owners of the new device reported that they were not getting much use out of the device because of the short life span. As reported by Mashable, the bugs and battery life did not only affect the new iPhone 4S, but older devices like the iPad and iPhone 4.

According to the official report from apple as seen on MSNBC's Technolog, the new iOS 5.0.1 upgrade fixes bugs in battery life, allows first generation iPad users to multitask, fixes bugs with documents in the iCloud, and even improves voice recognition on Siri for people with Australian accents.

According to a report on CNN, one of the major reasons for the battery drain on the iOS 5 was the prominence of location based apps and GPS trackers. When users simply turned the options off they experienced better battery life, but didn't receive the full experience of the new operating system and the new iPhone 4S. In order to combat negative publicity, the company decided to offer free cases while it worked on the problem.

As with the launch of any new device, there are always problems associated with the first versions. If still in beta, the iOS 5 bugs would not have been detected by the relatively small testing base. Now with most of the bugs kinked out, normal users can go about using the new managed server hosting, camera, and voice recognition services without fearing they will miss an important call because of a dead battery.
By Syndicated Maps at 11/30/2011