Does Verizon Have Any 4G LTE Customers? 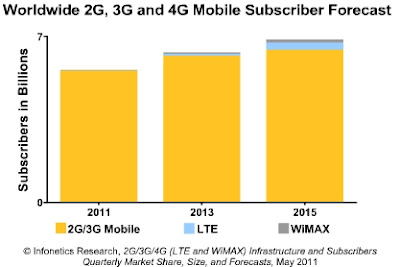 What struck struck me today listening to Verizon's (NYSE: VZ) earnings conference call was that Verizon may  have overbuilt LTE in expectation that users would just come.  Verizon now has over 200 "POPS" or markets that have LTE but it isn't clear how many users are actually buying new LTE phones and using the higher speed service.  Verizon's management failed to answer the question on the call of how many users were new to Verizon and how many were using LTE.  It begs the following questions:

1) Do LTE phone batteries last long enough?  I have heard from several customers that 4G LTE battery life is very poor.  2 hours is just not enough and battery efficiency must improve in order for LTE to take off.

2) Are LTE data plans too expensive?  Data caps and prices that start at $30, $50 and $80 per month for data that is not unlimited.  4GB, 10GP and 20GP seems like a consumer trap to me.  Without more transparency of data usage this will never work.

4)  Was LTE aggressively rolled out in order to try and steal customers from other carriers like AT&T, Sprint and T-Mobile?  I am not sure this is really happening and think AT&T might feel ok about its more conservative approach to rolling out LTE.   Verizon's stock price dropped after earnings and this could be the result of poor shareholder guidance going forward.

5)  Verizon says they have a lot LTE new products coming out around Healthcare and in Automobile but this sounds a bit too early in the consumer adoption cycle.  These products will undoubtedly be wildly overpriced and not for the masses.

6)  Did Verizon overlook that most consumers simply want to use their smartphones and iPad tablets on WiFi and don't need 4G LTE? 3G HSPA+ data services might be plenty of speed for the 90% of the wireless market.

In summary, I will not be bullish on 4G LTE services from any carrier until phone batteries will last up to 8 hours, data plans are unlimited, a cross-platform killer app like Apple Facetime exists, data networks are not constantly congested when you need it most and location based advertising starts subsidizing expensive phones and data plans.