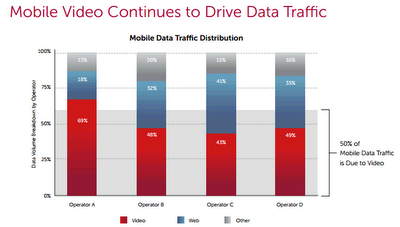 This Byte Mobile Analytics Report for the first quarter of 2012 provides insight into the forces driving the explosion in smartphone and tablet usage, the resulting impact on mobile networks. Across all geographies, video is now the leading driver of total data traffic on mobile networks at an average of 50%. In some networks, data volume due to video content is approaching 70%. See full Byte Mobile report here and below are some highlights.

Mobile Video Subscriber Behavior
•  83% of  traffic on iPhones & iPads comes from 3 apps:
Media Player, Safari and App Store/iTunes – at 47%, 21% and 15%, respectively.
• The average Facebook session generates only 120KB, while the average YouTube session produces over 40MB – nearly 350X the data volume. This is a clear indication of the significant load that video places on mobile networks

Mobile Advertising
• Android devices generate more advertising transactions and corresponding data volume on mobile networks than iOS device
• Google is the dominant source of mobile data traffic generated by advertisements. DoubleClick, AdMob and AdSense are all owned by Google and generate an average of 75% of the total data produced by advertisements