Has the iPhone Jumped the Shark? 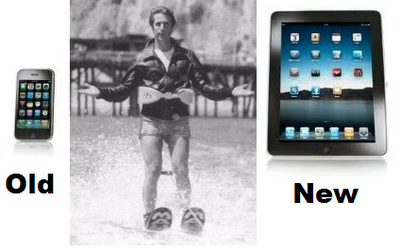 The future utility of smartphones will be primarily for:  Pictures, Video, Talking, Texting, Emailing & Tethering.  The future of smartphones will NOT be for consumption of content now that the iPad and tablets have taken over the mobile market.  So you have to ask the question if LTE smartphones will be the huge success as every wireless industry analyst is forecasting with short battery lives and small screens?  Most people don't realize the faster data speeds require more processing power which requires more battery life.

The iPhone may have officially jumped the shark now that the iPad has taken center stage as the hottest Apple product for mobile consumers?  Some may say that the iPhone 4G LTE is yet to come and it will be the next big thing, but I have to strongly disagree.  Why?  Because the experience of consuming content on the iPad is 1000X better on the iPad than it is on the iPhone.  A 4 inch screen versus a 10 inch screen will make you use your phone a lot less in favor of the iPad.  How about 10 hours of batter life versus 2 to 3 hours of battery life on most LTE phones.  Why would you want to pay another $600 for an iPhone 4G or LTE phone to occasionally download videos to a phone that has an inferior viewing experience to the iPad?

Using a WiFi only iPad while tethering to me is the best and most affordable experience that anyone needs if you are way from WiFi. HSPA+ is fast enough when you are on the go and when you need to download videos, WiFi should be your primary network.  Data plans and data caps will eventually cost too much and its just not worth the extra fees.  Plus you can't rely on these networks that are often congested and do not download at the claimed speeds during peak hours.

I constantly hear analysts saying that the iPad tablet is destroying the Mac & PC notebook market but it also may be destroying the smartphone / iPhone market as well.  Phone manufacturers keep coming out with new Android and iPhone upgrades but they have run out of compelling features to make the new purchases.  Lets face it the tablet experience is amazing for consuming content and it will eventually destroy the smartphone market as well.