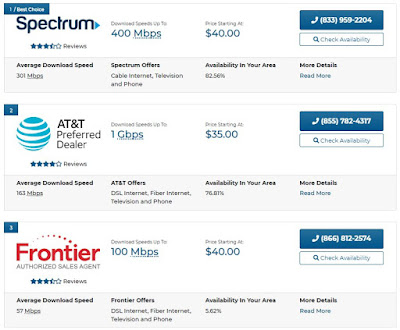 Texas ranks in the middle of the pack around 23rd amongst the most "connected" states in the U.S. it's surprising that over 30% of residents still don't have an internet subscription in their homes. Is this because of geography or because of demand?  Broadband availability, affordability, and reliability rely on demand for subscriptions within each region.  This region might be lacking demand due to the spread-out geography of the state.

A large number of active subscribers in a given area means that existing providers are able to distribute costs amongst more people, therefore prices are far more apt to go down. It also means that other internet service providers will see that the service is in high demand and they'll begin offering services in those areas.

Texas is the United State's second-largest state in area and population. With over 28 million potential customers and a vast landscape, it shouldn't be a surprise that Texas doesn't offer a "one size fits all internet solution" for Texans.

For the 3 million rural residents, satellite internet has been the "go-to" connection option type because it works best in sparsely populated areas where an installed dish can get a clear view of the sky. In more densely populated cities, wired fire or cable connection types work best because most use the existing cable and telephone infrastructures to deliver digital data into homes. Whereas, suburban residents can often utilize all of the broadband technologies due to the combination of its lower population density and utility infrastructure.

Internet service provider options include the following:
Even though Texas ranks 23rd amongst the most "broadband-connected" states in the U.S. it's surprising that over 30% of residents still do not have a high-speed internet connection in their homes.

The number of active broadband subscriptions in every state has increased each year. So if you don't have access to your desired internet connection type or provider right now, that doesn't mean that an option might not be available to you in a few months.
By Syndicated Maps at 5/22/2020