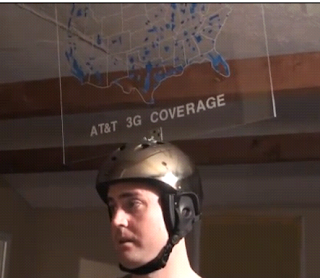 We need to hire this guy ASAP!   This is one of the funniest videos we have ever seen making fun of the marketing departments for both AT&T and Verizon.  This is a brilliant way to exacerbate the the feud going on between Verizon and AT&T in regards to map coverage.  This brilliant person had the creativity make his own coverage map helmet that shows AT&T's 3G coverage nationwide and went into stores trying to find a phone that could get him coverage in rural areas.
He enters an AT&T store to get some assistance and then goes into a Verizon store where he is greeted to a bunch of humorous talk from employees who drink the "coo-laid".  Kudos to him as he definitely managed to stir up some attention as he even walked around to a local movie theater where people complemented him and honked in support. He was so cool almost like Will Farrel and did a wonderful job in keeping his composure when questioned about the idea.  In the end he was unable to find the provider or phone that he was looking for.