Vodafone and others soon start advertising these devices 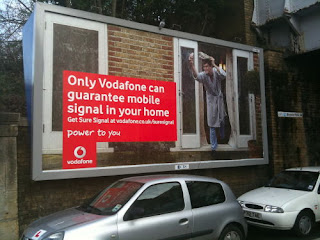 We really thought there would be a lot more femtocells on the market here in the US by 2010 considering all of the dead zones in the US and black spots or bad patches in the UK.. There are some femtocells on the market today, but for the most part, carriers are still in "trials" and have not educated the consumer about the product.  We are pleased to see the Vodafone UK has started marketing femtocells and educating consumers and maybe even acknowledging a UK blackspots map for UK.
It’s pretty common for mobile phone customers in Europe to get better deals than we get here in the U.S. Such is the case with a new femtocell from Vodafone called the Sure Signal pictured above. The device does what you expect a femtocell to do by routing wireless calls over your broadband connection for better signal strength.  The big difference is that Vodafone made the femtocell an attractive device by offering it to customers for a one-time fee. Vodafone users who spend £25 monthly or more on their rate plan can get the device for £120. Those who spend more can get the Sure Signal for as low as £50. No ongoing monthly fees are required and it supports up to four users at once.

Femtocells are expected to rise substantially over the coming years as a growing number of operators start deploying the devices to increase capacity and coverage in their networks, industry organization Femto Forum said Tuesday. At a briefing at the ongoing World Mobile Congress in Barcelona, the non-profit organization's chairman Simon Saunders said increased mobile spectrum and new efficient network standards like Long Term Evolution will not in themselves be enough to meet the explosion in mobile data generated by smartphones and laptops. Femtocells, essentially minimal base stations about the size of a small shoebox that cover an area of some 10,000 square feet, will increasingly be deployed in homes, offices and busy city environments to help offload the networks, Saunders said.

According to projections from analysis firm Informa, some 49 million femtocells will be deployed by 2014, he added. A few big operators including Vodafone Group Plc (VOD) and AT&T Inc (T) have recently started deploying femtocells, according to Sanjeev Verma, founder of U.S.-based femtocell maker Airvana Inc. (AIRV). There are a few hundred thousand femtocells in use worldwide, he said in an interview Tuesday but added that the number should rise sharply as Vodafone and others soon start advertising the devices.

Operators are interested in femtocells because they improve coverage in indoor environments and boost network capacity, said Verma. He said they also allow some applications for home environments, like synchronizing electronic devices over the network. A typical femtocell costs around $100-$200, Verma said, but added that operators will probably offer them to consumers at a subsidized price, much like they currently do with mobile phones.