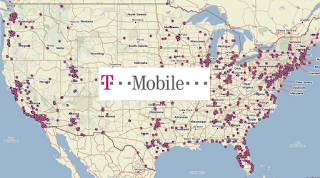 Coverage:  T-Mobile's coverage can be spotty in a few areas around the United States and Mexico, but not as bad as most people proclaim it to be.  Their features and flexibility far outweigh the lack of connectivity in most areas and provide the most valuable data plans.  If you don't have coverage in many areas simply make calls through T-Mobile's WiFi android app on some smartphones.  This is huge so you don't if you make a lot of calls indoors in remote places.  If you live in a major metropolitan area it is likely you will have comparable coverage to AT&T and Verizon 3G in most areas.  One benefit of being a smaller carrier means you are likely competing against fewer customers for network capacity. T-Mobile now has the best 4G (HSPA+) coverage and its great to be a customer with fewer people competing for coverage on the HSPA+ network.  The difference between 3G and 4G LTE is not that significant in my opinion if you are not downloading the video.  Nevada and some of the mountain states are some notable dead zones in their coverage network and even Northern California and Oregon have quite a few miles where service is not available. T-Mobile has network coverage in every state except Alaska, reception in rural areas can be spotty. Also, as with all carriers, the reception will vary due to location. International coverage is available in more than 187 countries. Their website does have a nice feature that allows you to check coverage areas by inputting your zip code and overlaps nicely with dead zones reported on our map on the right. If you travel a lot, they do have international service options, but it will cost you as roaming charges do apply.

Plans:  T-Mobile leads these carriers in free minutes and value now offering unlimited plans without long term contracts. Prepaid cards are affordable if you only want a short term plan.  For the money, they offer the freest minutes of any plan and likely the most value depending on where you live. T-Mobile offers more plans that are typically less expensive, particularly for Internet access, text, and multimedia messaging services. They offer several plans including business plans, pre-paid, family, and individual plans. They do offer free phones subsidized phones, including camera phones, but if you want to choose a different phone than the one they offer you will have to pay for it.

Other Reviews:
Feedback is always welcome.  Please submit your comments below.