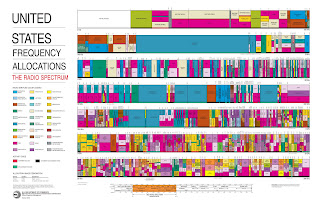 Where Is Spectrum Underutilized and Who Owns The Local License?
Reallocating spectrum is a difficult problem to solve and the carriers want the issue to stay complex as long as they can so nothing will get done and they can maintain the monopolistic market positions. There is a BIG  problem with US government allocation and the FCC when you compare us to Europe.  For example, Germany has 5 times more spectrum and 1/3 as many users than the US.  Something is wrong here and I suspect there are some fat cat companies which big bank accounts sitting on spectrum to corner the marketplace.  Is it a pricing issue going forward or an allocation issue.  The term auction for spectrum just doesn't seem like the best method if you have the consumers best interest in mind.
Ironically it doesn't take a genius to understand where reallocation of spectrum is needed based on our map of US dead zones.  Also, it was recently explained to me that only 25% of the United States land mass actually has cellular coverage.   So there is lots of opportunity regionally for entrepreneurs to take advantage of an allocation system that is broken if the government can simply get out of the way.
By Syndicated Maps at 2/25/2010