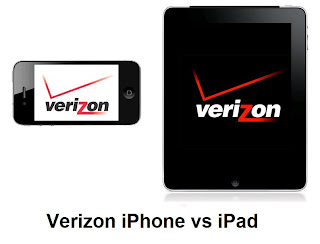 Does the Verizon LTE iPhone even matter now that the iPad is out?  Who is going to pay a premium for LTE on their smartphone if they have any iPad?  Smartphones is great for messaging and talking and iPads are best for consuming content.  Smartphone users are getting smarter and realizing the ideal form factor is 7 to 12 inches for viewing and reading content on devices similar to the iPad, Galaxy, and Android Tablets.  Yes, Verizon might have more reliable voice coverage than AT&T but their data speeds on an LTE or 3G network have not yet been tested.  I am a skeptic and think Verizon and Apple have wildly over-forecasted the number of people that are willing to buy an iPhone on Verizon.  Most of these will soon learn they can have a better experience on the iPad and just stick with their basic phones.

A 3.5 inch iPhone is a nice to have but it's just a tease for content you really want to watch and read on a device that is 7-12 inches. I have been an Android G2 customer for many years and its a great phone with 4G speeds and a beautiful screen like the iPhone.  However, as soon as I got the iPad I don't spend any more time using the phone to consume content.  No longer do I watch Slingbox, read Google News or Tweetdeck on the Android phone now that I have a 12-inch screen that looks and feels like a big smartphone.  The iPad experience is incredible especially if you tether the iPad to your smartphone and have an unlimited data plan.

The term for when a device when it finally loses its "luster with consumers" is called "jumping the shark".  I think the iPad "jumped the shark" as soon as the iPad came out and AT&T realizes the same thing.  We won't be talking about the iPhone 6 or 7 phones in the future because tablets are where it's at and the phone is going to get cut out of the party.
By Syndicated Maps at 1/10/2011