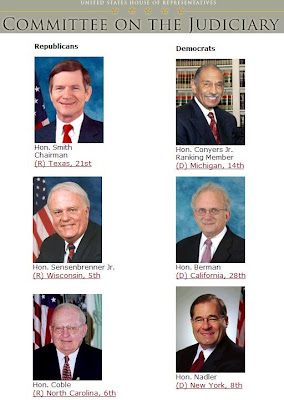 The U.S. House Judiciary Committee committee is supposed to look into possible anti-competitive impacts from the AT&T and T-Mobile merger which will lock up the market 80% of the market between two players Verizon & AT&T.  The 3rd largest carrier Sprint opposes the acquisition saying it's anti-competitive and will create an entity that will be impossible to compete with. The U.S. House Judiciary Committee will be holding hearings on the AT&T and T-Mobile takeover but are they objective? Does the House Judiciary Chairman, Lamar Smith, R-Texas have a conflict of interest with AT&T as his largest donor of campaign funds?  Do other Republican committee members on the committee also have a conflict?  If AT&T is one of the largest campaign donors shouldn't they abstain from any commentary and let those not close to the company lead the discussion?

Politicians are just puppets to the giant AT&T which pays millions of dollars to campaign funds and billions of dollars to shareholders.  The fact that AT&T is one of the largest employers in the Texas Chairman's District might make you wonder what secret dealings might already be in place.   Write to these House Judiciary Committee Members who are evaluating the AT&T and T-Mobile deal.  It is no secret that AT&T is one of the largest donors to the campaigns to committee members Lamar Smith (TX), Howard Coble (NC), Dan Lungren (CA), Darrell Issa (CA).  See the numbers here OpenSecrets.org.
By Syndicated Maps at 3/22/2011