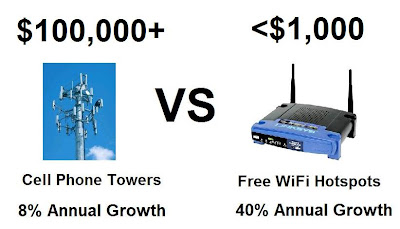 
If you do a calculation based on Boingo's market cap at $425M which at $13 per share which operates 325,000 hotspot locations.  This would value each hotspot location at $1,300 per location and which have multiple WiFi routers per location.  Pretty cheap and economical to scale if you ask me and will like come down into the few hundred dollar levels soon.  The economics of cell towers are getting worse as competition from WiFi networks increases.  Cell towers cost between $100,000 - $150,000 depending on the locations and are too expensive and cumbersome to get through city planning commissions.  WiFi hotspots are 1/100 the cost around $1,000 and are growing 5X faster and possibly more.

Every mobile phone subscriber is propping up a house of cards waiting to crash with faulty assumptions that wireless subscribers don't have options to move to free or WiFi-only solutions.  WiFi hotspots are becoming a rapidly growing form of alternative broadband communication to the overly congested 3G, 4G and LTE cellular networks.  Most WiFi locations are operated by independent providers as a free wifi hotspot or for a paid subscription from companies like Boingo (Nasdaq: WIFI).  WiFi is growing 5X faster than cell phone towers at 40% per year around the World.   It makes you wonder why cell phone tower stocks tanked recently on the T-Mobile and AT&T merger news?
By Syndicated Maps at 5/04/2011