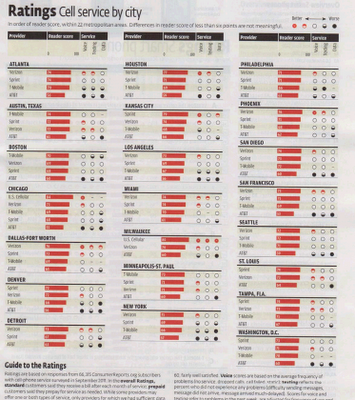 Does this Consumer Reports survey of 66,000 people have any credibility for a cell phone service shopper? This survey represents a narrow demographic of respondents. Even Consumer Reports states their “Findings might not reflect the general U.S. population.” Also, it is indeed a survey and does not contain any empirical testing of the type that has made Consumer Reports the respected entity it is today.

But the main reason these results are not meaningful, or fair for that matter, is the lack of information regarding smartphone users vs. old school phone users, broken down by the wireless provider being rated. Why is this important? Smartphones demand a much higher quality of service and bandwidth to operate. Even Consumer Reports implies that users who use their wireless devices primarily for talking and texting (non smartphone customers) are easier to please than those who have smartphones, who require more demanding tasks such as web surfing and watching videos.

Consumer Reports does not provide any data as to which providers in the survey were rated by smartphone subscribers vs. non smartphone subscribers. Thus, their results are comparing apples-to-oranges. For example, is it meaningful or fair to compare Provider A who, for example, was rated by customers who primarily use smartphones vs. Provider B, who was rated by customers who primarily use non smartphones? I think not.

My take? Consumer Reports should divulge the percentage of smartphone and non smartphones subs rating each wireless provider. This key information would allow readers to make fair and meaningful comparisons.

Deadcellzones.com surveys an audience of similar size of 60,000 but does so on a monthly basis. Thus we survey an audience that is 10 times larger than consumer reports. DCZ also provide searchable maps with very specific geographic information about coverage problems. Ask yourself which is more useful as a consumer shopping for service in your area?
By Syndicated Maps at 12/02/2011