Pandora vs Sirius XM: Which is Best? 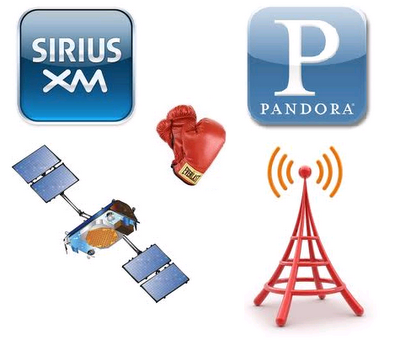 I recently had an epiphany on two recent two hour road trips that made me start to rethink my assumption that Satellite radio is more reliable than 3G / 4G radio.  I drove from Los Angeles to Santa Barbara on the 101 Freeway along the coast that notoriously has poor cell reception.  I also drove from Los Angeles to Palm Springs during rush hour and a heavy usage period.

I tested both Pandora streaming on my HSPA+ G2 Android phone and Sirius Satellite radio that comes with a factory installed radio inside my Volvo XC90.  Which did you think dropped fewer signals and had the best streaming audio experience?  Your intuition would make you think the Satellite performed better but you would be wrong.  T-Mobile's 3G HSPA+ network worked excellent the entire way along the coast and on the 10 Freeway without stuttering a song once.

So, why is Sirius XM starting to lose signal in areas that you would least expect.  Sirius also loses a signal in an area you would expect under bridges and in areas blocked by buildings or a parking structure.  Its can be annoying at times when listening to Howard Stern who has funny punch line every few minutes. Is it their terrestrial repeater network that is being congested?  Do their satellites need an upgrade or is it interference?

My speculation is that Pandora does a better job of downloading more content and caching songs ahead of time.  Pandora caches songs so when you enter areas of poor cellular strength you have radio content to stream.  Sirius on the other hand only caches a few seconds of the song or show and therefor if you lose signal you are likely going to lose some of the content.

I also tried something new using my cars new Bluetooth streaming feature that sends audio from my phone into my car stereo speakers.  I used the Pandora app on my G2 T-Mobile phone and it work great.  Keep in mind I have an unlimited data plan with T-Mobile so I am not worried about going over my data plan.  Pandora streaming doesn't use as much data as you'd think so it begs the question, how much data does Pandora use on cell phone?

In conclusion, I think that 3G / 4G / 5G streaming in the car radio has a lot of promise in the future as more consumers realize its pretty easy to do.  However, carriers are going to have to be more lenient and transparent about data caps and usage for customer in order to not scare people off.  Fore those who have unlimited data plans enjoy your Sirius or Spotify mobile apps as much as you want.  The experience is going to have to be cheap for the masses to use it.  Therefore, other services will have to be embedded into the car radio like Direct TV, Navigation or OnStar emergency services in order for consumers to pay a premium.
By Syndicated Maps at 1/27/2012