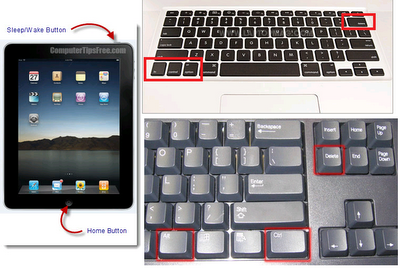 The commonly used computational devices are the PC, iPad and the Mac. As with all modern gadgets, there can be problems overtime. Here are some tips and tricks to solve the most common problems associated with these devices.

The iPad is a hand-held, touch sensitive device to meet your everyday computational and recreational needs. With the advent of the iPad, a new industry relating to designing applications for this device has flourished and the Apple app store is filled with thousands of applications to choose from. This also leads to numerous conflicts; with the turn-around time in application development being small, testing of apps is not always adequate and this often causes problems.

The most common reason for iPad becoming unresponsive is due to runaway’s application.

(1) To solve you hold the sleep/wake button until the slider appears then instead on swiping the slider, press the home button this should resolve problem.

(2) If step 1 does not work the device should be switched on and off, this is done by holding the sleep/wake button and swiping the red slider to switch off the device and then put it on.

(3) If the both steps 1 and 2 fail, then pressing the sleep/wake button along with the home for ten seconds.

(4) If all else fails, the system can be restored using iTunes. Plug in the USB cord to the computer with iTunes installed, then hold on to the home button while connecting it to the USB to the iPad, allow the iPad to charge for 10 min and then continue to hold the home button. This will pop up an icon saying "connect to iTunes", now fire up iTunes and the "recovery mode" alert should pop up.

Apps causing the system to freeze

This is also a common problem with the iPad, and some applications may act adversely with your system. You could try reinstalling the app and see if this solves the problem, some apps get corrupted and they, at times need to be reinstalled. Do remember that once an app is downloaded from the app store you can reinstall it any number of times and on multiple systems.

The iPad enables multi-tasking by default and many apps try to take advantage of this feature. Many apps, even after closing remain active. Closing these apps that are not in active use can often hasten up the system.

(1) Press the home button twice in quick succession, a task list window opens up and shows the list of running applications. Select the application that needs to be shut and hold it down until is starts wiggling and a tiny red minus sign in the middle appears, tap on this minus sign to completely close the app. By closing apps you should be able to speed up the iPad.

The Macintosh systems introduced by Apple computer Inc. is a user-friendly and reliable computing device available in the market. The mac system is a carefully crafted with the uber-reliable operating system (Mac OSX).

Is the system slow or crashing?

The mac systems do not automatically reboot themselves but can get slow at times. If you have recently installed or un-installed a software in your mac then you have a prospective culprit for causing system slowdown.

(1) The first test is to reboot the system to see if it improves the speed, if not you will have to boot the computer with extensions turned off.

(2) Turning with extensions off can be done by holding the "shift" key down till the machine completely boots up. If this resolves your problem then you have an extension conflict or items causing problems during start-up. You can then take a closer look at the start-up items and remove the intrusive ones.

Are you getting weird disk related errors?

(1) The other common problem could be with the corruption of the directory structure. You can solve this by popping in the install CD, and repair with the disk-utility manager available.

If the CD is not available, hold down the "Command-S" keys during start-up this should take you to the single-user mode and will open up the "text-prompt" window. When the prompt appears type "fsck -fy" and this will automatically repair all disk conflicts and then type "reboot" to restart the system.

(3) The other common error is the disk permission error, this also indicates that there were some problems related with the hard disk and the data was locked down to prevent damage. This can later be unlocked by running the disk-repair utility. This can be brought up by typing "Disk Utility" in spotlight.

(4) If you are using Mac OSX leopard and above, try using the time-machine. All you need is a spare external hard-drive, the hard drive needs to be plugged in and time machine makes a copy of your system into the disk. This can be used to restore the system at a later point.

This is the most ubiquitous computing systems and these have their fair share of problems.

The Computer does not start up

The most common of them all, is that the computer does not boot (start up). The most common cause is software or hardware-software conflict. Software incompatibility can lead to slow booting or the system may not boot at all. There steps you can take to solve this problem are:

(1) Start the computer using the "safe mode", this can be done by starting the computer and holding the "F8" button on the keyboard.

(2) Go to the control panel use "Add and remove Programs" and click on the recently installed software and uninstall it.

The hardware-software issue is generally related to driver incompatibility and corrupted drivers.

(1) Again get in through the safe mode and locate the "my computer" and right click on the icon followed by "manage" and "event viewer". There are three tabs look at all three tabs, those checked in yellow are bad but red is worse. Just beneath, there should be a "click for more details", this will take you to the Microsoft site and this should give you an answer.

The PC may, at times automatically reboot itself. There are several reasons why this could happen.

(1) CPU heating is the primary cause: A CPU could overheat due to several reasons, a program heavy on graphics could trigger this, in which case, the CPU takes all the processing pressure and over-clocks and results in a reboot. This happens when there is no dedicated graphics card installed in the system. This can be checked by clicking the "Control Panel" followed by "System and Security" and then "System". Click on the "Advanced System Settings", this should pop-up a window called "System Properties", click on the "Hardware" tab followed by "Device Manager" and look for "Display adapters". As in the image shown if there are no dedicated graphics cards installed, this could be the problem.

(2) Another reason could be that the fan inside the computer is either malfunctioning or clogged up with dust. A simple cleaning should do the trick in this case.

(3) A badly aligned heat-sink or to do with the melting of the thermal-paste could also be a cause of constant rebooting, in which case it is best you take professional help.

(4) A problem with RAM could also be the issue, the RAM can at times go badly and this can result either in a system slowdown, a blue screen or sometimes a reboot (when computing is shifted to a segment in the RAM that is corrupted). You could use the Windows memory diagnostics to test for RAM related issue. This can be solved by replacing the RAM, and there is no loss of data or any other concerns.

The Windows Memory Diagnostics can be activated by typing "mem" at the start-up and following the instructions given on the screen from there-on.

(5) Rebooting could also be due to the hard-disk, this is one of the more common problems. The hard disk is a component in the computer that stores data, both the user's as well as the system's data. Overtime, the hard disk can develop bad-sectors, the information stored in these sectors are lost. If this data happens to be a vital system related data, then the system can crash leading to a reboot, or a screen freeze. If a hard-disk is failing it can sometimes give out small clicking sounds (do not confuse this with the spinning sound), and this indicates that the hard-disk needs changing. Windows 7 also gives an alert when the HDD status is critical.

The hard disk error can also be checked by right-clicking on the HDD and selecting the 'tools' tab followed by 'check now'. This will automatically check for disk errors.

PC, Mac and iPad are three popular devices, commonly used by people. The most common problems associated with the PC, are software related and at times due to software-hardware conflicts. In the Mac systems, the problems are start-up related or disk related, while in the case of iPad the problems are associated with unresponsive touch screen and the iPad running slow.

About the author: Kelly is a blogger by profession. She loves writing on technology and luxury. Beside this she is fond of technology. Recently an article on cellphone beat attracted her attention. These days she is busy in writing an article on style guru.
By Syndicated Maps at 5/25/2012