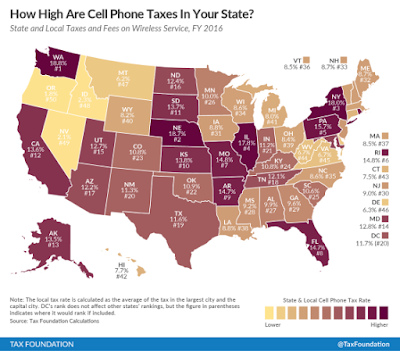 18.6% of the average wireless customer’s bill goes to federal and state taxes and fees. Put another way, a family of four that pays $100 a month for their cell phone plan will pay about $225 a year in taxes, fees, and government surcharges. Most customers pay a variety of fees on their wireless bills, including federally mandated charges, plus state and local taxes — as well as surcharges imposed by the carriers as a way to recover the costs of divvying up the money to the required agencies.

Tax Foundation found that American wireless customers annually pay approximately $17.2 billion in taxes, fees, and government surcharges. The biggest chunk of that, about $7 billion, goes to sales taxes, while over $5 billion is paid as part of the federal Universal Service Fund (USF) surcharges.  Read More
By Syndicated Maps at 10/12/2016