North Dakota Access Pipeline protesters believe local and State authorities have jammed cellphone coverage during an operation to force activists from a camp they had set up on private land.  However, authorities dispute that, saying the spotty nature of cellphone coverage in the remote area is to blame. More Info.

According to the Deadcellzones.com map of North Dakota there have not been many cell phone coverage complaints in the area submitted to the map.  However, this could be due to the fact that not a lot of people live or commute in this area.  We anticipate after writing this article that coverage complaints will likely be submitted.  Check back soon for an update.

More than 140 people were arrested Thursday during a standoff over a camp set up at the site of a planned pipeline in North Dakota. About 200 activists supporting the Standing Sioux Tribe moved onto the site last weekend, setting up teepees and tents and saying the land is rightfully theirs under a more than century-old treaty, according to CBS affiliate KXMB.  More Info

There are also reports that the State cut off water access to Native Americans protesting the Dakota Access Pipeline.  The state supplied two supplemental water tanks as part of ongoing support for tribal protests against the construction of the Dakota Access Pipeline, but those tanks were removed after they were determined to be at a secondary site outside the state's jurisdiction. More Info

Where is the Dakota Access Pipeline Protest?  Here is a map. 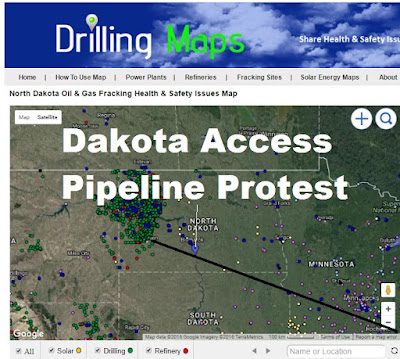