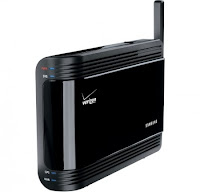 Check for Availability in Your Area
After all of the "Can You Hear Me Now Commercials" and "AT&T Coverage Map Bashing"  Verizon Wireless still has incredible amounts of Dead Zones to fill in. You would never know from their misleading commercials but less than 50% of US homes have seamless wireless coverage and could use a femtocell to improve home coverage.  However, in order to improve Verizon's coverage in your home you the customer must pay for your own personal mini cell phone tower at a cost of $249.  Keep in mind Verizon's femtocell is only 2G as well and not 3G currently.
Sprint was one of the first carriers to launch femtocells with Sprint Airave (awful close to the trademark name Airwave) in 2008, but Verizon was not far behind in bringing femtocells to the masses with a Verzion Wireless Network Extender in January of 2009.  AT&T 3G Microcell is also in trials in North Carolina, Georgia and San Diego and is expected to launch nationwide sometime in the Spring of 2010.  T-Mobile is also in trials with Ubiquisys and Huawei and is expected to launch something this year as well.  The black box will send out a CDMA signal covering up to 5,000 square feet of the home or office with support for up to three simultaneous calls. Like Sprint's solution, the Wireless Network Extender uses GPS to verify that you're not creating little tiny Verizon networks outside the U.S. and plugs into the internet source of your choice via Ethernet. It'll be available in Verizon stores and online for $249.99. Pretty expensive if you ask me and not clear if an additional monthly subscription or long term contract goes with it.  We have only read reviews online that are quite negative about the price but would like to hear from consumers who actually use the product in our comments section below.

Be aware of the pros and cons with cell reviews allowing you to compare before deciding on a mobile phone purchase.
By Syndicated Maps at 2/22/2010