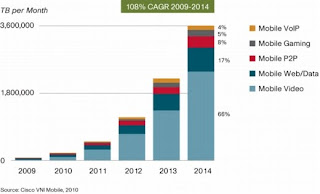 Video Will Account for 66% of Global Mobile Data Traffic by 2014
Cisco's Mobile Data Traffic Forecast Update, 2009-2014  Mobile data traffic will double every year through 2014, increasing 39X between in 5 years.  The advent of laptops and high-end handsets onto mobile networks is a key driver of data traffic, since these devices offer the consumer content and applications not supported by the previous generation of mobile devices. Chief among these new sources of traffic is video, but other applications such as peer-to-peer (P2P) are already making an impact. As shown below, a single laptop can generate as much traffic as 1300 basic-feature phones, and a smartphone creates as much traffic as 10 basic-feature phones. iPhones, in particular, can generate as much traffic as 30 basic feature phones. 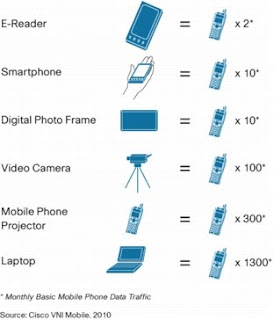 High-End Handsets and Laptops Can Multiply Traffic
Cisco has estimated the amount of smartphone traffic that can be offloaded through dual-mode devices or femtocells see below. The offload factor for each country is a combination of smartphone penetration, dual-mode share of smartphones, percentage of home-based mobile Internet use, percentage of dual-mode smartphone owners with Wi-Fi fixed Internet access at home. In many developing countries and regions, the offload percentage declines, while in developed regions, the offload factor steadily rises throughout the forecast period. The declining offload factor in developing markets is due to a decreasing number of mobile data users with Wi-Fi at home. Since dual-mode devices are primarily smartphones, the overall offload amount in the current year is much smaller than shown above, since non-smartphones still account for approximately half of handset traffic. 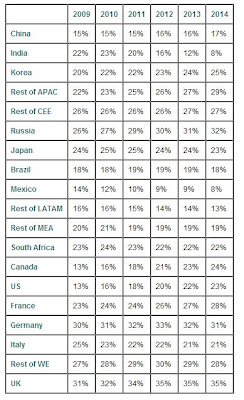 Dual-Mode and Femtocell Traffic Offload as a Percentage of Smartphone Traffic
Comments appreciated on this topic below.
By Syndicated Maps at 3/01/2010