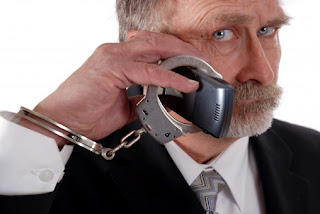 Contracts Reduce Customer Churn . . . Not Service
It has become fairly obvious that if AT&T's lost its' current iPhone or iPad exclusivity contract that they would suffer tremendous customer carnage.  Every person I speak with tells me that if AT&T didn't have them locked into a Blackberry or iPhone contract they would switch to another smaller carrier.  Unlike, Europe where you can purchase a phone 1st and pick a wireless carrier 2nd.  US customers are only offered subsidized phones that lock them into exclusive carrier contracts.  It's bogus in my opinion and should get more government regulation by the FCC who continues to be a pussy on this topic.
This issue is not too dissimilar to Microsoft's operating system and browser issue that the government considered Anti-Trust and cracked down on. I think we all would have better coverage, less dropped calls, and data congestion if fewer customers were competing on the same network.  When 65% of the entire US customer base is controlled by two mega networks AT&T and Verizon everyone suffers.  If the 160 other wireless carriers "could" compete by accessing the same handsets we would all be better off.  However, as long as AT&T and Verizon are two of the highest paying dividend stocks the Ponzi scheme will continue and the FCC will always be pussies.

The cable industry could become formidable competition for the two big operators but right now Time Warner, Comcast, Cable Vision have their heads up their ass focussed on Wi-Fi.  Cox on the other hand is buying wireless spectrum and has a chance to be very disruptive if they can get the handsets and femtocells right.  One thing that does concern me is their dependence on Sprint and Clearwire for reseller contracts.  Stick to your quad bundles and offer Broadband, DVRs, Femtocells, and Voice (Wireless & Land).
The following charts the top 10 U.S. wireless carriers in the first quarter of 2010 by average monthly churn, according to research firm Strategy Analytics, and includes major metrics--such as churn, ARPU, and revenue--of each carrier. Sadly there is not a correlation between customer churn and poor coverage according to these numbers.  However, as networks and handsets are decoupled in the future our dead zone data will become more relevant.  See details here.
I often wonder will lack of customer churn persist if other handset manufacturers begin to catch up to the cult manufacture we know as Apple.  I share the view that its best to chose a carrier who has least amount customers in areas your frequent.  For example, there are very few T-Mobile customers in my neighborhood and therefore my coverage is pretty good at my home.  Also, I love the Android operating system and G1 phone so I am a bit biased.  I always recommend being somewhat of a contrarian when shopping for phones and its great to understand who is experiencing dropped calls and data congestion in your area.  It is likely that too many people are competing for the same cell phone tower.
By Syndicated Maps at 5/13/2010