How to Boost Your AT&T Reception Outdoors 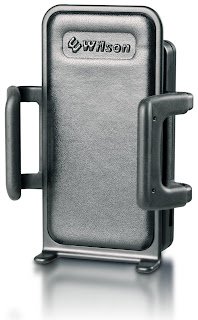 Sleek Booster Helps Callers Hear You Now, Even With AT&T
Article By Todd Bernhard from iPhone Life, Saturday, May 8, 2010 - AT&T. Nothing inspires more conversation among iPhone owners than those few letters. AT&T has benefitted from their exclusive contract, but their coverage has been an easy target for competitors and late-night comics. What is an iPhone road warrior to do?

I had the chance to try the Sleek from Wilson Electronics, Inc. ($130 MSRP). True to the name, the Sleek is smaller than Wilson’s previous models and more portable than hardwired models. I had always been hesitant to try any device that needed to be permanently wired into my car or that worked exclusively with one phone.

The Sleek piqued my interest, as it is both universal and somewhat portable, although you may want to hide the wiring for the external magnetic antenna. Wilson offers the iBooster, specifically for the iPhone, which is a combination charger, cradle, and antenna so you don't even need to mount an external antenna. With either booster, you might have to remove your phone from its case for it to fit, depending on the bulk of your case.

Skeptical by nature, I wanted to see for myself if the Sleek could improve reception. Styling, pricing, and packaging are irrelevant if it doesn't improve reception! The good news is, Wilson Technologies' Sleek booster worked, for me and for my iPhone 3G.

Initially, I took a road trip to some diverse areas around Rochester, NY to see how it performed. I went to the airport, downtown, suburbs, and the highway where I've experienced dropped calls before. I made and received calls throughout the journey and never experienced a dropped call. Then I decided to push the limit!

With the help of DeadCellZones.com, I located some dead zones within driving distance and spent half a tank of gas (and most of my birthday!) testing these spots. I went to the end of the earth, or at least the edge of the United States, to the northern border of New York, along Lake Ontario. Sure enough, without the booster, I could watch the bars disappear as the lake approached, until there was no signal, just “Searching”. I plugged in the Sleek. Unfortunately, dead means dead, and even the Sleek couldn’t get a signal at that remote location. But I drove around for a minute and as soon as I could get a signal, I measured the results both with and without the Sleek and it was significant.  Read More.
By Syndicated Maps at 5/10/2010