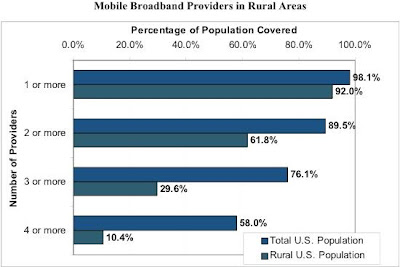 Its not surprising to see that a large portion of the population has limited choices when it comes to cell phone service. The chart above provided by the FCC shows that only 10% of the rural population have 4 wireless carrier options that most city dwellers have.  In-fact most rural customers only have 1 or 2 wireless options and that makes it difficult for competition.  Contrary to the commercials you see on TV touting 98% of the population covered it proves this claim is meaningless.
Carriers are highly profit driven based on ARPU (Average Revenue Per User) and typically invest dollars where their highest concentration of customers reside. However, what you don't read in the press is that most of the 160+ smaller rural wireless carriers see this problem as an opportunity and often provide better coverage.  Rural Wireless Carriers Have Better Coverage

Many of these smaller carriers which are not covered in the mainstream media lease tower space back to the giant wireless operators AT&T, Verizon, Sprint and T-Mobile in some areas.  Consumers will not notice that they are on another carriers network and the data or voice roaming is typically transparent to the user. 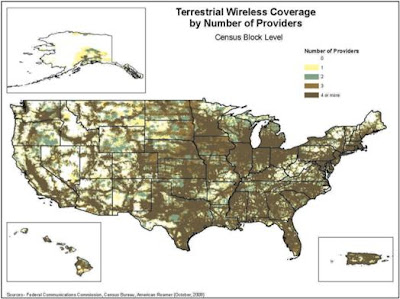