Walt to FCC: Consumers Are Getting Screwed 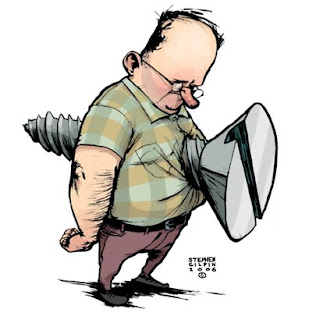 It has been a tough Spring for FCC Chairman Julius Genachowski and Walt Mossberg to tighten the screws even more with questions at the D8 Conference about consumer broadband and wireless.  Our sound bites with the interview highlights and read the full interview here.


Why are U.S. Broadband Customers Getting Screwed?
Walt Mossberg: jumps in to note that U.S. broadband customers are being screwed on performance AND cost. “They have slower broadband than lots of other people and they pay more for it,” he says. “You’re the head of the FCC: Why won’t you fix this?”
Genachowski: There’s no silver bullet. There are things we can do to drive more innovation. Unleashing mobile is the most important thing we can do. There’s no doubt in my mind that mobile broadband will drive innovation. We have an enormous chance with 4G.
Can the FCC Fix it So People Who Complain Will Be Able to Make Calls?
Walt Mossberg: recalls a question from yesterday’s session with Steve Jobs about AT&T’s capacity problem. Noting the dramatic increase in demand for data on AT&T’s network, he asks if Genachowski can fix it so that people who complain about not being able to make calls on AT&T (T) will be able to make calls
Genachowski: I think on an issue like this where AT&T hears from its consumers every day about how bad it is, I don’t worry so much. I worry more about issues where consumers are disempowered. Things like the number of consumers who don’t know what their broadband speeds are, for example. Ultimately, we want to give consumers the information they need to be better consumers. … What we’re looking at is digital labels that will show consumers what their actual broadband speeds are as opposed to the speeds they’re told they’re getting. I think we’re in an era when information technology creates opportunities to empower the consumer to make the market work more efficiently.
Is there Enough Spectrum Available to Solve the Problem?
Genachowski–The FCC plan that I inherited provided for new spectrum coming on the market that’s about a threefold increase over now. Until you see the new demand being driven by devices like the iPhone and the iPad. It’s 40 times. And we need to address that.
Walt jumps in, noting that the spectrum is finite. Is there enough spectrum available to solve the problem?
Genachowski: There’s enough available if we have the right policies in place. We’ve got to work on policies that themselves create better efficiency, policies for trading spectrum, for example.
Can Policy Improve Broadband for Consumers?
Walt wonders if it’s even possible to get some sort of policy implemented that would improve broadband for consumers.
Genachowski says it is, but concedes that “some elements of the system are broken” and prevent the country from moving as quickly as it could on its infrastructure initiatives. “We’re kidding ourselves if we think that the infrastructure will come simply because we want it to come….We need dramatic investment and we need an environment that encourages innovation.”
Why Are Cable Set-top Boxes So Awful & Consumers Have No Choices?
Walt: talks a bit about the state of the set-top box. The boxes that the cable companies give you are awful, he says. But there’s a law meant to promote options. Why aren’t you enforcing it?
Genachowski says he is, noting that consumers can buy CableCard.
Walt: Why don’t you make companies make better CableCards and better cable boxes?
Genachowski concedes that the CableCard strategy hasn’t quite worked out the way the FCC had hoped. The agency is now looking to see if there’s a sort of universal gateway that will solve the set-top box issue and allow innovation in the living room, he says. But the pay folks are concerned about how this will preserve the integrity of the pay stream. We’re at the point technologically where we can explore devices that preserve that pay stream while improving the broadband experience, he says, and we’ve set a goal of 2012 for developing a device like this.
Has the FCC lost its Authority?
In April, a federal appeals court found that the FCC had overstepped its bounds when it censured Comcast (CMCSA) for violating its net neutrality principles and in so doing, called into question the agency’s authority to regulate the Internet. In May, 282 members of Congress, from both political parties, petitioned him to suspend the FCC’s plans to reclassify broadband as a telecommunications service, a move that would, once and for all, put broadband under the agency’s purview and clarify its jurisdiction.
And so today, Genachowski heads an agency whose legal authority is in question, as is its ability to implement a much needed National Broadband Plan. And his ambitious policy agenda is, for all intents and purposes, on hold. What will he do now to regain momentum and fix the country’s ailing broadband policies?
By Syndicated Maps at 6/03/2010