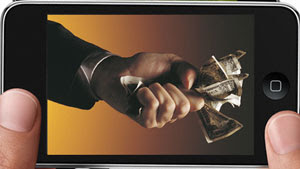 There are three large mobile network operators in the Netherlands and only T-Mobile sells the iPhone currently.  Similar to AT&T in the US, a large portion of T-Mobile's customer base is angry from lack of 3G data access, dropped calls, and calls going directly to voicemail even with full 3G coverage.

It is now obvious that such problems aren't limited just to AT&T.  Similar to AT&T, the problems are worse in the largest and most tech-savvy cities like San Francisco and New York.  These problems are now so bad that T-Mobile is offering a little cashback for affected users.  Why doesn't AT&T do this?  iPhone users have complained about T-Mobile's data performance for some time, but recently the problem seems to have spun out of control. Not only is 3G data service slow, but voice service is also suffering in certain locations on 3G phones—not just the iPhone.

The iPad will soon arrive in Europe, along with a newer iPhone 4G with new data-intensive features such as video chat. The cell phone industry has been struggling with increased data usage by smartphone users, but with "unlimited" plans the increase in use doesn't lead to an increase in revenue, so expensive network upgrades directly impact the bottom line (and not in a good way). In this light, AT&T's move away from unlimited mobile data makes a lot of sense but users hate volume-based pricing for Internet access and this likely will have a long-term negative outcome.  Read More From Arstechica
\\
By Syndicated Maps at 6/07/2010