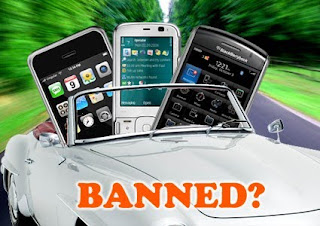 If you get caught using your cell phone while driving the fine will range anywhere from $20-$125 depending which State you are ticketed in.  Cell phone ticket laws and fines vary drastically from state to state just like photo enforcement.   However, many are proposing to raise the fine to make you really think twice about putting the phone up to your ear.  Here are some startling statistics about accidents and deaths while using a cell phone while driving that might make you think twice.
The following are a list of states that ban drivings from using handheld devices and texting while driving. 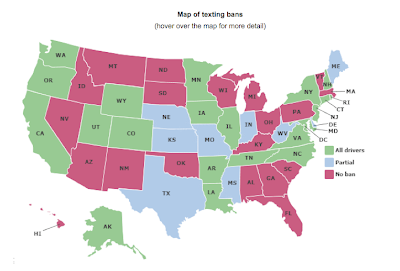 8 states prohibit all drivers from using handheld cell phones while driving. All laws are enforced by an officer who may cite a driver for using a handheld cell phone without any other traffic offense taking place. No states have banned all cell phone use (handheld and hands-free) for all drivers, but many prohibit all cell phone use by certain drivers. 29 States ban novice (various from under 21, 19 and 18) and school bus driver. 18 states ban use of a cell phone when passengers are present.  See details
30 states ban text messaging for all drivers and 26 states have primary enforcement
Related Stories:
How to Send a Text Hands-Free
By Syndicated Maps at 7/07/2010