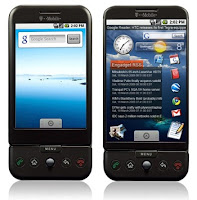 G1 Google Phone vs G2 Google Phone
T-Mobile has launched its G2 phone which has a much faster processor and runs on the HSPA+ network.  I was able to pick up my phone just before the CTIA show as a favor and love it already.  Here are some apps that were pre-loaded on the phone which I love.  Google Voice, Google Listen for Podcasts, Swipe for texting with one hand, Google Places for finding locations easily, Google Goggles, PhotoBucket and many enhanced contact syncing features for Facebook, Twitter and Gmail.

Its a great phone and the form factor is even better than I thought.  The flip-up screen and the placement of the navigation bar are in the areas you would expect.  The power button on top makes it easy to turn on a swipe to turn on.  The screen is slightly larger and it sits nicely in your hand to use without the keyboard.  I had the Samsung Galaxy for a short time and returned it because I prefer to have a keyboard and didn't like the way it sat in my hand as a wider phone.  However, the G2 is perfect and much better even though it is slightly heavier than the Galaxy but slightly lighter than the iPhone 4.  I haven't noticed a difference in the processing power as promoted on the Galaxy and think the G2 processing power sufficient.  Also, the 8GB micro SD card creates a lot of room.  We still aren't sure if there is a front-facing camera but the rear video and picture camera is excellent.

Everyone who has had the G1 knows about the dreaded memory loss and it has become virtually impossible to run apps on a phone without the Task Killer application running in the background.  The G2 has much more processing power and expanded memory capability on the 2 GB internal and 8 GB SD card and internal memory.  I would also expect to see a lot of data offloading features pushing capacity off applications like YouTube from the carrier network onto Wifi. Google Maps has a stronger presence on it with preloaded apps  It remains to be seen what will Google's answer be to Apple's Facetime application that seems to be captivating iPhone 4 users.  It seems to me that this could be a feature enhancement of Google iChat and Google Voice integration.   A Skype IPO could help light a fire in this area as wel..

T-Mobile seems to be the preferred network if you are Google user and live in a large metropolitan area.  The trend today seems to be smart users moving to smaller carriers with less people on the network.  That certainly is not AT&T or Verizon who own 66% of the market.