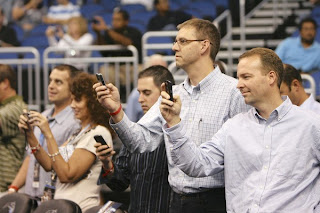 Orlando just moved into a new $480 million Amway Center, touted as a technological marvel but cell phone coverage was overlook during construction. Orlando city officials say the various wireless carriers are working to improve coverage inside the massive stadium but think the bureaucratic process could take months. It's unclear exactly which carriers are experiencing spotty coverage because the quality of coverage apparently varies from carrier to carrier. Some Magic fans are reporting no issues at all.

Cell phone boosters are apparently on the way provided by a company contracted by the city called Crown Castle. It is a public company trading under the ticker CCI and is installing about 150 cell-boosting antennas and will be completed by the end of the month. The longer process will come trying to get the individual wireless carriers contracted and piggybacking on the Crown Castle system.

It isn't clear what the stadium is technically using if it is a Picocell, Femtocells, Repeaters or Distributed Antenna System (DAS). This is going to be an ongoing issue at many NFL, NHL, MLB, NBA, NCAA, stadiums around the US in the coming months. Stadium cell phone coverage is a focus for many carriers as they begin to roll out 4G, Wimax and LTE networks.  Other questions remain whether the stadium owners were friendly to the fans and implemented their own free Wifi network.
By Syndicated Maps at 11/09/2010