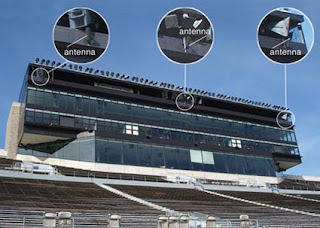 Stadiums & Airports Are A Focus for LTE 4G Not Current 3G Cell Phone Towers
LTE 4G cell phone tower build outs will NOT be as big of an opportunity as projected by the analysts for the cell phone tower operators like American Tower, SBA Communications and Crown Castle. Carriers are taking a much more rifled and focused approach to building out new towers versus the shotgun approach used for 3G network build outs.  Carriers are taking 3+ years to build out the new faster networks and only will do it if the demand is there.

New cell sites are getting built at 4G airports & stadiums that have concentrations of people and customers.  These high traffic areas first are also getting smaller cell tower antennas which are taking on different forms like distributed antenna systems and femtocells.  Tower operators are starting to use new systems built by femtocell manufacturers that are starting to eat into the traditional cell tower business.  One other new industry growth opportunity would be for one of the cell tower operators to get into the Wi-Fi business because many speculate that Wi-Fi cell phone towers are the future.

In order to understand this read up on the "inside out" strategy for building the LTE networks. Carriers are building out LTE 4G much differently than they did 3G which was much of a shotgun approach without much focus. Carriers will focus on smaller sites first like stadiums, malls, hotels and homes (using femtocells) and then move to build out where capacity is needed most. Its not the same as a 3G where they blanketed entire markets. Carriers also recognize that devices aren't ready yet for the masses and most people are not going to be watching movies in their cars or outdoors.  This is why AT&T to Spend $1B on Free Femtocells does not bode well for the cell phone tower operators who don't have their tentacles in this market yet.