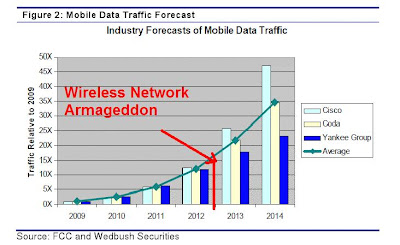 The analysis compiled three notable studies on mobile data traffic growth from Cisco Systems, Coda Research, and the Yankee Group. The average of these three studies estimates mobile data traffic to grow 5x between 2009-2011, 20x between 2009-2013, and 35x between 2009-2014. FCC Chairman Julius Genachowski indicated that these studies were done before the iPad/tablet boom and therefore the growth may actually be understated. Our study shows that cell site growth is 7% while decelerating and Wi-Fi growth is accelerating to around 40%. in the U.S.

There is obviously going to be a spectrum deficit and the pain that consumers are feeling is going to get even worse. Some solutions trying to tackle the problem include hardware at each cell site to optimize the radio networks, offloading data to Wi-Fi and femtocells. Media optimization and compression will likely be used as well and might be more cost-effective.  However, ultimately there will be 10-20 times more Wi-Fi networks and soon there will be more organic Wi-Fi management companies like Boingo, Fon & Google Wifi (TBD) to help users access the almost free networks.
By Syndicated Maps at 11/08/2010