Why is T-Mobile WiFi Calling is Not Free? 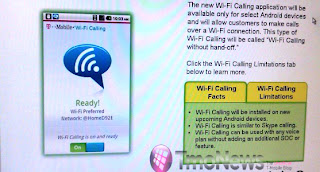 Why is T-Mobile WiFi Calling Not Free
We just spoke with a friendly T-Mobile customer service representative who took the time to look up & read the actual billing policy.  Wifi calling is be billed exactly like normal cell phone tower calls just like nights & weekends, my faves, & mobile-to-mobile.  The Wifi usage minutes will be reflected on your bill, unfortunately.  The question remains will this last forever as Google Voice and Skype start to steal revenue and minutes from the carrier.  One of the benefits of making Wifi phone calls is to save money and not pay $1.25 per minute to make calls overseas.  To do this most iPhone and Android users have used the Skype, Truphone or Google Voice apps to make cheap calls that range from .02-.05 cents per minute.  Since you are not using T-Mobile's network and using free wifi, it doesn't make any sense to still pay the ridiculous rates of $1.25 per minute to make calls overseas and this will need to change.
T-Mobile has had a reputation for having an inferior network to Verizon, Sprint & AT&T in some areas.  However, if you live in a major metropolitan area the coverage is pretty good.  For many T-Mobile users who live in heavily wooded areas, the hills or simply where a cell phone tower signal does not reach into their home.  Wifi is now an option to make and receive phone call.
Wifi phone calling endorsed by the carrier is a major industry breakthrough as all of the major carriers have been putting this development off for about a decade for fear of cannibalizing their overprice voice subscription business.  For the millions of people who don't have a signal in their home or office all you have to is have an Android phone and it will update your system automatically to make calls.
T-Mobile has been the one US carrier that has not taken a femtocell strategy of fixing in-building coverage.  Instead, they have partnered with Kineto app that allows Android phone users to make Wifi phone calls.  This is interesting because Kineto was VC funded many years ago with a femtocell strategy and quickly changed course to adapt to the market that wasn't willing to pay $200+ for the network device.
By Syndicated Maps at 11/06/2010