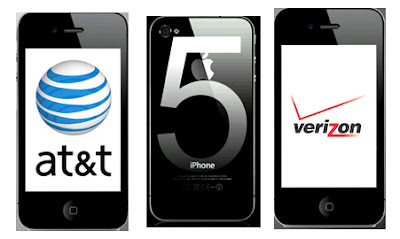 3G or 3G? The iPhone 4 will not work on any HSPA+ or LTE network so waiting for the iPhone 5 is your best option.  AT&T is building out its HSPA+ network which will be faster than 3G and thus waiting for the iPhone 5 might be prudent if you are already an AT&T and iPhone customer.  Verizon's 4G is going to be LTE and this should be fast but it's going to be very expensive and don't expect the phone to come out anytime soon.  4G HSPA+ works great on T-Mobile and it's fast and has been running for many months now on many Android phones.
Data Speeds: AT&T does have a faster data network than Verizon's CDMA.  AT&T iPhone 5 will likely be compatible with HSPA+ and the iPhone 5 for Verizon will likely be on LTE.  No one knows exactly what the speeds will be but you will not likely notice the difference as a user.


Data Plans:  Paying $29.99 per month for unlimited data is very expensive especially when you are only using 50% or less of your voice minutes and that usage is declining.
Multi-Tasking:  AT&T is only capable of talking on the phone while surfing the web or reading email.  Verizon says they are working on a solution but it will likely require WiFi.

Battery:  We speculate that AT&T's network might be a bit more battery-friendly than Verizon's CDMA network which has been notoriously bad on the Motorola Droid battery.

Tethering: It's not clear who will offer to tether and at what price but we speculate this will be an issue.  Most sophisticated users are simply tethering their iPad or Laptops and not subscribing to an additional data plan for the device.   T-Mobile's HSPA+ network is most friendly about tethering on the Android G2 and MyTouch phones.

Antenna:  Verizon moved the antenna on the phone presumably to fix the death grip problem.  However, it's not clear if the Verizon phone will still need an iPhone bumper to prevent the hands from shorting out the antenna signal.


Traveling:  GSM networks are more widely used worldwide and it's easier to switch data plans and SIM cards when traveling overseas.
SIM Cards:  CDMA Verizon iPhones will not use a SIM card making it more difficult to switch handsets.
Dropped Calls:  In theory, Verizon CDMA should drop fewer calls but it's not clear what impact the iPhone will have on its slower 3G data network.  It will likely be good at first but who knows what will happen if 5-10M users suddenly start taxing the network with data usage.


No Contract:  Verizon is starting to sell the Verizon phone without a contract as rumored in the press release.
By Syndicated Maps at 1/13/2011