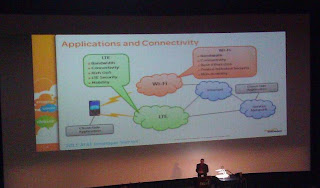 Quality of service is going to be the biggest differentiator from LTE to WiFi. Is this enough to get people to pay $50 per month for this reliability? We challenge some of the claims the wireless industry is making that the best efforts WiFi isn't enough. Bandwidth alone is not going to be enough to get consumers to pay. The example that Wi-Fi stinks in your hotel so you need LTE is poor marketing and will not help convince the masses that you need LTE.

Is 4G Hype?  Does AT&T have any credibility promoting reliably with all of their network problems and dropped calls? I don't think so and in most cases, WiFi actually works better on the iPhone than 3G.  I really hope the blogger community wakes up and smells the coffee and does not get bamboozled into believing that 4G is going to any better than 3G or Edge reliability.  We are also not surprised that carriers are starting to unleash their WiFi security propaganda in order to put fear into the ears of consumers who are using public hotspot networks.  The truth will emerge in due time.
By Syndicated Maps at 1/05/2011