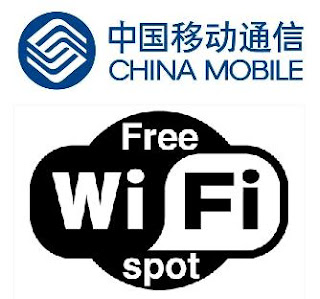 China Mobile is making a huge investment for the people creating the largest free public Wi-Fi hotspot network. In a desperate move to find ways to offload data traffic from congested mobile networks, mobile operators are looking at all options including WiFi. China Mobile announced they planned to triple the number of public China wi-fi hotspots from around 300K to over 1 million. China will use the Fon.com business model where users are incentives and paid to open up access to their Wi-Fi in return for being able to roam elsewhere.  Pretty ingenious and you wonder when Google will offer free ad supported WiFi?  It all makes sense to me.  I open up my WiFi network in my home and Google subsidizes or pays me for those who access it.  How does Google or Fon.com get paid?  They sell the location based WiFi advertising on the access point very similar to how Ad Sense started to pay publishers who visited their web sites.

China Mobile is building 1,000,000 WiFi hotspots, including 20,000 to blanket Beijing. China realizes that building out the Wi-Fi network is the fastest way to meet rising Web demand by smartphone users. Each China mobile subscriber gets a Fonera WiFi router or femtocell, designed to allow part of the landline bandwidth to be shared with other wireless users. The customer can turn off the sharing, but most allow it in return for being allowed to roam themselves. Result: nearly all the usage at home, and much of the use out of home, is quickly diverted to the landline network with 10x or more the capacity.

Fon.com is the world's first global WiFi network built by people who have WiFi in their homes. We think of it as crowdsourced WiFi network or open access. As a member of the Fon.com community, you agree to share a little bit of your WiFi at home, and get free roaming at Fon Spots worldwide in return. Sharing WiFi with Fon is safe and secure, and you won't even notice when others are connected because Fon only uses a tiny portion of your bandwidth. Fon has over three million Fon Spots across the globe. Just buy a Fonera router and connect it to your ADSL/broadband, or activate Fon through one of our partners. Once your Fon Spot has been connected and registered, you're ready to enjoy all the benefits Fon has to offer!
By Syndicated Maps at 2/15/2011