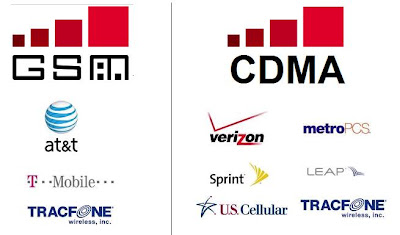 AT&T will soon consolidate T-Mobile and become the only GSM carrier in the US.  Tracfone is a pre-paid carrier that offers both GSM and CDMA so it doesn't really count.  Is this fair competition?  T-Mobile has been the only GSM alternative to AT&T and post-acquisition there will be none.  What happens to consumers who purchased GSM phones and want to move to another carrier?  What happens to the handset manufacturers around the World who want to sell their products in the US?  Why should consumers care about GSM?  If you travel internationally you will know what I am talking about.  GSM is the World standard for phones and allows you to travel in most countries around the World without buying a new phone.

Consumers will be facing very limited choices for wireless service in most regions. The result will be only two competing technologies (CDMA & GSM) that all wireless carriers use, all the small regional carriers have to negotiate roaming deals with either Verizon or AT&T if they want to offer full coverage to their customers. The deal would further entrench the playing field with one CDMA giant and one GSM giant and fair negotiations would be even harder.

Verizon is a CDMA carrier and Sprint operates iDen and CDMA phones that donot work in most countries when you travel around the world.   Smaller regional carriers MetroPCS, Leap, US Cellular and Tracfone all use  CDMA as well.
By Syndicated Maps at 3/23/2011