Vodafone Was Trying to Buy T-Mobile

Its always interesting to see what other companies might have been in the bidding war for T-Mobile.  Apparently, Vodafone (Nasdaq: VOD) was a very serious player at the table making a bid for T-Mobile USA as well and was ousted at the last minute by AT&T's enormous bid.  Based out of the UK, Vodafone would have been by far a better option for the US entity of T-Mobile.  The company has a market capitalization of $150B similar to AT&T but larger than Verizon's $105B.  This would have finally brought at 3rd and formidable competitor to the US market. Vodafone could bring a European buying experience to phones that we don't get in the US.  European companies are also about 5 years ahead of the US in terms of technology innovation and adoption of techniques for improving coverage and speeds.  If you look around the World most Countries besides the US have 3 large players in the market competing for customers.  However, the US only has AT&T and Verizon and drastically smaller players T-Mobile and Sprint.  I suspect that AT&T executives positioned themselves to Deutsche Telecom as "tight" with the US government regulators and claimed they could get the deal done more quickly than Vodafone could have.  Its sad to see T-Mobile taking a step back and not getting purchased by a company that could significantly bring improvements to an industry that desperately needs new blood and change.  Below is a map of Vodafone operating countries in red and affiliates around the World.  Verizon is their affiliate in the US. 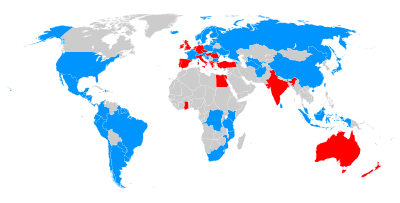