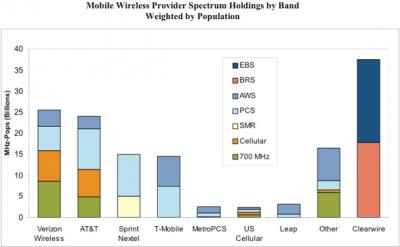 Why the spectrum shortage exaggeration?  AT&T is simply trying to block competition and thus making your service worse in the long run.  The "spectrum crisis" has been hugely exaggerated for political purposes.  Spending billions of dollars to have the right to use airwaves or licensing wireless spectrum, is essential to phone companies and its a huge government revenue generator despite very few people understanding it.  Most spectrum today is unlicensed such as WiFi but the licensed spectrum is often hoarded to fend off competition.  For example, AT&T has gone to great lengths to add capacity to its congestion 3G network in such cities as New York and San Francisco not by tapping its unused spectrum, but by upgrading its cell tower and networking equipment and backhaul.   If AT&T's data network is overloaded in an area, the traffic doesn't move over to T-Mobile's network if there is spare capacity at the tower. But that would happen after the two companies combine, resulting in better utilization but likely even more network congestion for both AT&T and T-Mobile customers.

More spectrum available means more simultaneous phone calls and more data can be carried in the same area.  According to the experts AT&T already has an ample supply of unused wireless spectrum that it plans to use to expand its network over the next several years. And much of T-Mobile's 3G spectrum is already in use, so the acquisition won't result in fresh airwaves becoming available for AT&T customers.

AT&T has reasons besides spectrum hoarding to pay $39 billion for T-Mobile.  It lost the iPhone exclusivity and wants to persuade T-Mobile's customers to switch to smartphones, which carry higher monthly fees and data plan. That's an argument that appeals to Wall Street investors, but not to regulators at the FCC or the Department of Justice who are reviewing the merger.  All the more reasons why we think the Obama Administration will block the merger in order to persuade the industry to have 3 large competitors and encourage vertical integration not horizontal.
By Syndicated Maps at 4/04/2011