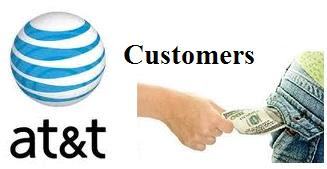 On the heals of Verizon (NYSE: VZ) charge $93.5M in illegal taxes AT&T (NYSE:T) tops it stealing nearly 10 times more at $1B dollars.  The taxes collected were said to be in violation of the Internet Tax Freedom Act. The law bars federal, state and local governments from taxing Internet access and from imposing discriminatory Internet-only taxes such as bit taxes, bandwidth taxes, and email taxes between Nov. 1, 2003 and Nov. 1, 2014.

Of course AT&T did not admit any wrongdoing in the Class Action case filed.  Lawyers at Midwestern law firm, Bartimus Frickleston Robertson & Gorny PC filed lawsuits in all 50 states. Robertson said that the class in the case varies in size depending upon how it is counted. He said there are roughly 29 million contracts and 49 million individual phone numbers that are covered under the class period, which runs from November 2005 to September 2010.


A federal judge in the U.S. District Court of Northern Illinois approved a proposed settlement in the case last week. According to lawyers at the Kansas law firm Bartimus Frickleton Robertson & Gorny PC, AT&T will be working with the firm to get state and local governments to repay a maximum of $956.16 million to customers.
Read more: AT&T faces $1B settlement in mobile Internet access fee lawsuit - FierceWireless
By Syndicated Maps at 6/07/2011