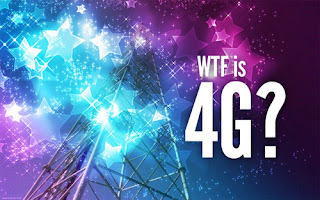 Techies throw terminology around all the time, and often we have to pretend that we understand what they're referring to. In this post, we'll try to explain and elucidate some of the tricky lingo used frequently in today's circles. Specifically, we'll look at the G's, 2G, 3G, and 4G - what they are, and what they mean for us.

The Gs refer to stages in the development of cellular technology. G stands for "generation." 2G, therefore, means "second generation" cellular systems. Service providers have just begun to roll out fourth generation networks, the most advanced technology developed to date. We'll get to fourth generation in a bit, but let's back up to the beginning, with 1G.

The systems retroactively dubbed 1G were the world's first mobile telephone networks. The first 1G network surfaced in Tokyo, in 1979. Over the next ten years, mobile networks were slowly built in countries all over the world. 1G systems communicated with analog signals, using continuous radio waves to transmit information. The analog system was dumped for digital communication with the advent of 2G in the early 90s.

The second generation of cell phone technology improved system capacity, allowed mobile data service with text messaging, and lowered the radiation emitted from phones. Much of this was affected by the move to digital communication, swapping continuous analog signals with the short burst, message-style transmissions of digital technology. 2G is still used in many parts of the world today.

It would be another ten years before the debut of 3G onto the world stage. 2G systems were strengthened and altered, ushering in mobile internet, video calling, mobile TV, and videoconferencing. Officially, 3G is not a specific technology, but a standard—an outline of specifications for cellular networks. Several different systems have been built that all comply with 3G requirements, such as EDGE, CDMA2000, and UMTS. Different service providers, like AT&T and Verizon Wireless, build and use their own designs for their respective networks. It's the differences in this sort of network structure that define whether or not your phone uses a SIM card.

Recently, the wireless communications world has been abuzz about 4G, the latest development of digital communication. The fourth generation standard aims to increase the speeds and thus the capabilities of 3G-enabled tasks, like mobile internet. Before 4G, downloading or streaming movies, songs, or any significant amounts of data to a mobile device was an abysmally slow process, if at all possible. 4G minimizes the difference in user experience between using a top-speed computer and your smartphone. In fact, it's 4G technology that justifies smartphones' existence.

"So that was all very nice," you might say, "but how does that affect me?" Well, the sort of technology your phone or mobile device uses will affect what accessories, upgrades, and supplemental systems you can attach and sync with it. For instance, signal boosters, which enhance weak cellular signals, read very specific transmissions. To amplify the weak signal for your 4G phone, you'll need a 4G booster capable of decoding and transmitting 4G signals. It's all quite simple, really. You now have the power to take on those tech nuts and show them who's boss.