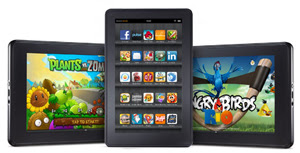 Amazon Kindle Fire with Android OS is Coming for $199


Amazon announced today a WiFi only 7 inch Android tablet that it will sell for $199.  However, will Amazon's next version of the Fire have free 3G wireless?  Amazon allows customers who have the black and white Kindle to access AT&T 3G for free.   The next Amazon Fire could have free AT&T 3G for $299 similar to the black and white Kindle for $79.  The current WiFi only Fire tablet has a 7 inch screen and weights only 14.6 ounces.  The Amazon does not include 3G and you can pre-order it for $199.  Shipping date is November 15, 2011.

This is a tremendous breakthrough for the industry where the device itself becomes a commodity and the services behind the device become the real value.  Subscriptions to content like Pandora, Netflix or Amazon movie become more important and thus will allow Amazon to subsidize the price of the device.

It remains to be seen if newspapers can get into the game of require subscriptions to view their content.  My speculations is they won't have much success getting people to pay for news and simply will have apps build in this Android platform that are filled with ads.

If you compare this device to the iPad 2 its $300 cheaper and does not have the following features.  Camera and GPS which are unnecessary for most tablet users.  Tablet users are primarily inside the home and office and only need WiFi.   Also, if you are a savvy user and have figured out how to tether WiFi devices to your 4G smartphone than the WiFi only version will also be sufficient.
By Syndicated Maps at 9/28/2011